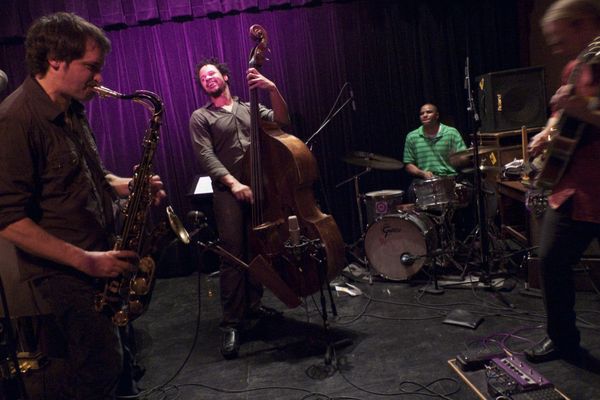 Skerik, the endearingly saxophonic, punk jazz iconoclast, introduces his latest project Bandalabra. Joining him are three of his fellow Seattle hometown's most revered players: Andy Coe on electric guitar, Evan Flory-Barnes on upright bass and Dvonne Lewis on drums. In Skerik's words, Bandalabra is intended to conjure the sounds of "Fela Kuti meeting Steve Reich in rock's backyard." A bold assertion, but one for which the music bears witness. Together, the quartet syncopates and snakes, floats free and snaps tight with hypnotic afrobeat rhythms, minimalist canons and improvised harmonics. There's a duality that demands listeners both dance communally and get lost in their daydreams. On their debut album 'Live At The Royal Room,' captured at the band's first ever public performance, the foursome head into the deep unknown, creating music in the moment for over 60 minutes straight. Halfway through the evening, they hit upon the illest of psych grooves, one later dubbed "Beast Crusher." Here the visceral and cerebral become one, the music explodes into the Northwest skies and Skerik's Bandalabra is born into the world a fully realized vision.
www.skerikmusic.com