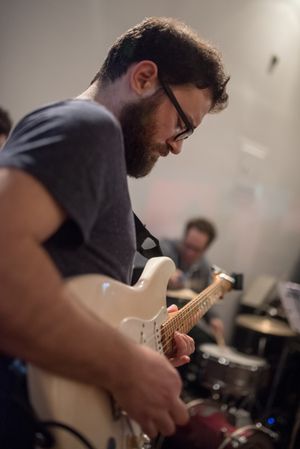 "What Bob Lanzetti has presented with Whose Feet Are These That Are Walking is a thoughtfully executed musical plate, replete with uncommonly clean flavors -at once tasty, signature in style and just spare enough to keep the appetite truly stoked for more from Mr. Lanzetti in the future."

Bob Lanzetti is a Brooklyn, NY based professional guitarist, composer, producer, and educator. He has performed and recorded with many artists throughout the NYC area as well as played in over 40 countries with the three time Grammy Award-Winning jazz/funk collective, Snarky Puppy.

Growing up on the Jersey Shore, Bob had the fortune of studying music with NYC area based guitar greats Chris Buono, David “Fuze” Fiuczynski, and Vic Juris. In 2000, Bob moved to Denton, TX to further his education at the University of North Texas where he earned a Bachelor's Degree in Jazz Studies. In addition to his studies he was fortunate enough to get involved in the thriving R&B and Gospel music scene in the DFW area as well as meet the musicians who would go on to form the core of Snarky Puppy.

As a member of Snarky Puppy, Bob has had the opportunity to contribute as a writer, arranger, and guitarist, playing on every recorded release and performing all over the world. The Pups have earned three GRAMMY Awards to date. Best R&B Performance in 2014 ("Something" featuring Lalah Hathaway), and Best Contemporary Instrumental Album in 2016 and 2017 ("Sylva" with Metropole Orkest and "Culcha Vulcha", respectively). Since 2006, Bob has been residing in Brooklyn, NY. There he has become an in-demand session guitarist performing and recording with many artists including Tommy Sims, Bokanté, Michelle Willis, Cory Henry, Ghost-Note (Robert “Sput” Searight/Nate Werth), Lucy Woodward, Musiq Soulchild, Bilal, Banda Magda, Underground System, and many others.

In addition to sideman work, Bob writes, records, produces, and performs his own original compositions with his quintet. His debut record, Whose Feet are These That are Walking, was released September 29th, 2017, with a tour to follow. Bob has composed and recorded the score for two dance films for the Allendance Company as well as performed improvised solo guitar music for yoga and dance classes.

As an educator Bob teaches music and guitar out of his Brooklyn studio, has given clinics around the world, and has worked in outreach programs through Carnegie Hall for underprivileged teens to write, record, and perform their own original music.